One of the most picturesque festivals in Thailand is without hesitation Loy Krathong. During the celebrations, which will take place today (November 22nd 2018), Thais gather around water points such as lakes, rivers, and canals to show their respect to the God of Water by offering their craft rafts (Krathong) adorned with candles, incenses and flowers.

Each year, Loy Krathong falls on the night of the twelfth lunar month (usually November), at the end of the rainy season, when the full moon makes its appearance. The Krathong and the flickering lights of the candles offer an impressive show throughout the country.

What is Loy Krathong?

The story behind the religious holiday is very complex and the Thais celebrate it for several reasons. The rice harvest season is coming to an end and it is time to symbolically let loose all the hatred and grudges accumulated.

If your candle stays lit until your Krathong disappear from your sight, your year will be full of luck! Traditionally, Thais drop their Krathong into rivers or small canals called “Klong”. But today, lakes, ponds and other waterways do the trick.

The festival will also make you dream with its dances, fireworks, parades and beauty contest. Enjoy the whole experience by going to Chiang Mai, the festival is very famous and every year, many people take a trip to the North. But it is also possible to go to Phuket and Koh Samui to admire the different celebrations of Loy Krathong.

What is a Krathong?

Difficult to explain, there is really no equivalent in English. “Loy” means float and “Krathong” means a small boat, vessel or raft. During the festival period, you will find Krathong already assembled or to assemble and decorate yourself for sale at most of the country’s stalls.

In the old days, Krathong was made from bark and banana leaves. But nowadays, people are more creative, using coconut, flowers, bread …. 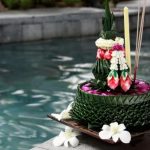 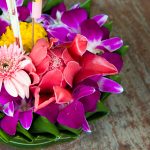 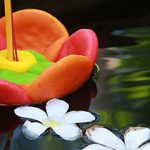 “Krathong made out of bread”

Where to celebrate Loy Krathong in Bangkok?

This year in Bangkok, an official event is organized: the River Festival. The festivities will take place along the Chao Phraya River at the following 9 locations: 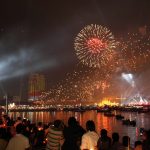 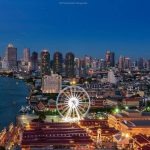 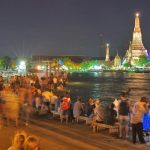 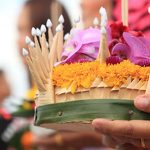 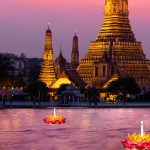 You will also be to celebrate the Festival of Enlightenment going near the streams or ponds in the parks of Bangkok: 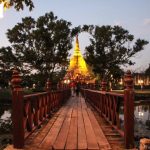 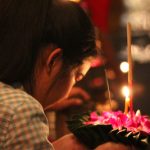 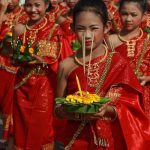 Every year, Sukhothai Historical Park is open to the public free of charge to celebrate Loy Krathong. On the program, several sound and light show on the pond that surrounds Wat Sa Si. 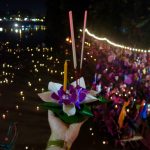 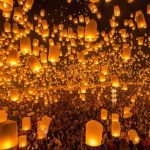 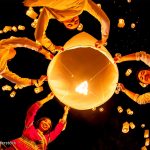 Chiang Mai is certainly the best destination in Thailand with beautiful shows for Loy Krathong. Along the river takes place every year the Yi Peng Festival. This holiday is Loy Krathong and is celebrated by the Lanna people from northern Thailand.

Of thousands of colourful lanterns adorn temples and houses while residents and tourists launch paper lanterns in the sky, called Khom loy. Greetings and prayers are written on the lanterns before releasing them.

The best rooftop in Pattaya