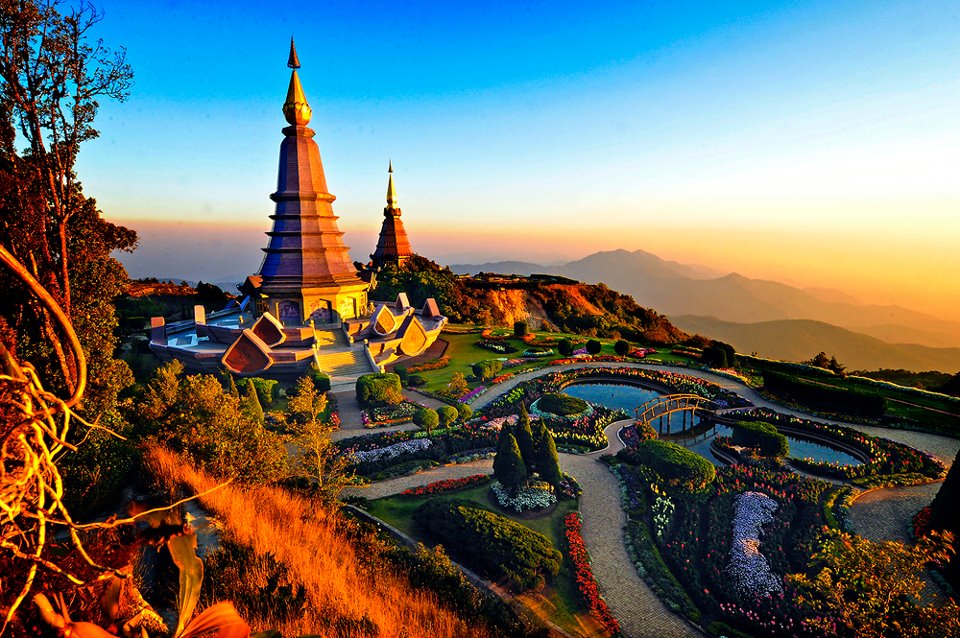 Chiang Mai is a town of just under one million inhabitants in the North of Thailand. Recognized for its historical, cultural wealth, and strategic geographical location in the north of the Kingdom, Chiang Mai is the center of a vast natural environment that attracts more and more tourists every year.

Indeed, wherever you are in Chiang Mai or in the surrounding districts, it is never far from nature, mountains, rivers, and stunning national parks. As a big city, Chiang Mai also offers all services, shops and activities you might find in a large western city. The four main hospitals, with the international standard, are Bangkok Hospital, Maharaj Nakorn Chiang Mai Hospital, Chiang Mai Ram Hospital, and Lanna.

Doi Suthep is the name of the mountain that overlooks the agglomeration of Chiang Mai, and the name of a sub-district of the city. Although Mount Suthep is not the highlight of Thailand, it dominates the entire region and the city of Chiang Mai. It is best known for the impressive views that attract many tourists every year. To access, a direct route from the city center allows to reach the top of the mountain. Very well laid out and with a perfect asphalt, this beautiful route is highly appealing to cyclists who love to challenge the mountain.

Beyond sight, Doi Suthep offers a number of activities. Beginning with hikes or treks or you can enjoy mountain biking descending to Chiang Mai, which takes about three hours. Another major attraction, Wat Doi Suthep temple, nestled near the top, attracts many Thai and foreign tourists.

The other part of sub-distrit, Doi Suthep comprises a significant part of the city of Chiang Mai, including streets and part of the avenue Huai Kaeo. In these neighborhoods, located in the east of the city, we find the prestigious University of Chiang Mai, the city zoo, and the waterfall Huai Kaeo. As for Nimmanhemin Road, close to the university; it is considered as the trendy Chiang Mai, attracting students by many restaurants, shops and modern bars.

Hang Dong district is found at the southwest edge of Chiang Mai, just next to the International Airport. This is very broad since the area travels through southern part of Chiang

Mai to Samoeng, more to the west, and passes through the southern slopes of Mount Suthep.

The part of Hang Dong, nearest Chiang Mai, is relatively developed; welcoming modern amenities, shops and malls, as well as houses consisting of small villages and more isolated areas. The more we move away from the downtown, the higher concentration of homes decreases to make room for nature and plantation.

As the name suggests, the Hang Dong Golf Club is located in this district. In addition to golf courses, Ban Tawai is reputed to be the largest craft market in the northern part of the country. There are merchandises made by mountain tribes to modern furniture in the avant-garde style.

Saraphi is located in the immediate continuity of Chiang Mai, in the southeastern space. As a suburb of this city, the District Saraphi sees many changes thanks to the economic development of the region. Projects for home, villages, and urban development are promoted every year. The south of the district is quieter and mainly up to fields, plantations, as well as tropical landscapes.

Despite being a fairly quiet and small district, Saraphi is home to the vast Saraphi Gassan Lake City Golf & Resort that is popular amongst international golfers. Furthermore, the motorway from Bangkok passes in the middle district, making access to Chiang Mai become very fast and convenient.

The city center of Chiang Mai has always been appreciated by the tourists because of the quality and quantity of its very places to visit. Evidently, i

t is formed by charm with some ancient walls surrounding the historic center and the narrow streets. The historic center contains several exceptions such as the temples of Wat Chedi Luang and Wat Phra Worawihan Woramahaviharn Singh. Many restaurants, both Thai and international, are there to delight the taste buds of tourists.

Chiang Mai is famous for its markets, starting with the Night Bazaar, in the east of the historic center, which takes place every night. The flower market is also spectacular to visit with its millions of exhibited flowers of all colors. As for the Sunday night market, one of the main arteries of the city, the city center turns on for a night in large friendly market. By that, it attracts people from throughout the region.

Even within the city, one can discover the Chiang Mai Gymkhana Golf Club, a veritable institution in the region. In terms of shopping, the city center offers a wide selection of shops, pharmacies, bookstores, banks and crafts. For imported goods or supermarkets, three major shopping centers are located near the historic center, offering all possibilities. In the north-west of the city towards the Mount Suthep, one finds the Kad Suan Kaew mall. Also, the Central Plaza is located near the airport. As for the brand new Central Festival in the North East of the historic center, it gives a good idea of ​​the economic vitality to the region.

Get a 20-year visa when buying a property in Pattaya