The marvels of the Greater Mekong have been expanded this year with the discovery of 163 new species, including a fanged frog with a taste for birdlife.

The frog features, along with a tiger-striped pitviper, a new wild banana and a tube-nosed bat, in a WWF report about the Greater Mekong – a district bordering Cambodia, Laos, Burma, Thailand, Vietnam and China’s Yunnan province.

The Mekong is the world’s 10th largest river, flowing 2,703 miles from Tibet to its delta in southwest Vietnam. Its name in Thai translates as ‘Mother River’.

The river and its surrounding area is already known for wonders such as the Giant Mekong Catfish, which can reach an astonishing 3 metres in length.

The fanged frog lurks in forest streams, where it generally snacks on insects and fish. However, its broader dietary habits were uncovered when scientists poked about in its poo and discovered tell-tale feathers. 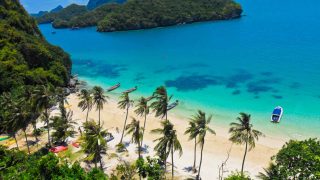