Expats who retire before 50 now have another reason to feel smug – the Thai government has re-introduced a special visa to welcome them.

Spending at least 10 million baht (about $295,000) in Thailand now earns an investor’s visa – designed for those who do not intend to work in Thailand – which can be renewed each year to give its holder permanent domicile in the Kingdom.

Expats qualify for the visa by buying a condo that lifts them over the 10-billion-baht threshold or by making a combination of purchases that hit the target – such as a cheaper residence along along with a wodge of state bonds.

Technically, the visa requires transferring 10 million baht into Thailand and spending it in one – or a combination – of three ways: buying a condo or renting one for at least three years, putting it into a fixed deposit account at a Thai bank, or purchasing government or state enterprise bonds.

The visa is actually a revival of a measure introduced to woo foreign cash as Thailand pulled itself out of the 1997 Asia Crisis.

This earlier visa – which required an investment of 3 million baht – was closed to new applicants on 1 October 2006. The new visa has applied since 25 November 2008. 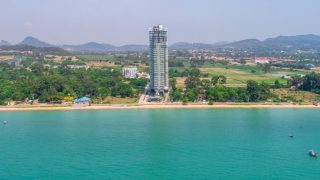